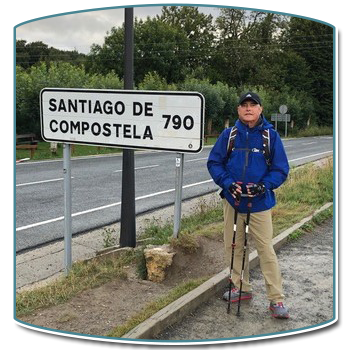 In October 2019, PWC member Scott completed a 5-week trek across northern Spain on the Camino de Santiago – The Way of Saint James – a path that pilgrims have followed for centuries.  His interest in doing the trek began about 15 years ago, when he met a woman who had completed the walk. “Her face was aglow as she talked about the experience,” remembered Scott. It stayed in the back of his mind until a few years ago, when he retired from federal service and began thinking about the Camino again.

The reasons that people hike the Camino are as numerous as the trekkers, who number about 300,000 a year, with increasing participation by hikers from the United States. Many trekkers are following a spiritual calling; they are on the trail to reach Santiago de Compostela, where the bones of St. James the Apostle are reportedly buried in the cathedral. Others may be walking the Camino for the physical challenge, or to allow themselves dedicated time for contemplation. There are other trails that feed into the Camino, and trekkers may follow those combined with sections of the Camino or choose the full 500 miles across northern Spain.

Much of this long route is in the Pyrenees mountains. This creates strenuous conditions for walking, particularly on the first third and the last third of the trail. The middle section is challenging in a different way. It traverses a flat and arid plain called the “meseta,” where there’s not much to see and it’s easy to start questioning your commitment to the trek, according to Scott.

Before taking on the full trek, in 2017 Scott and his wife went to Spain and walked the final leg of the Camino into Santiago de Compostela; 100 miles. He observes that this 10-day trek was a learning experience in some ways. “I had terrible blisters, I didn’t think much beforehand about socks and blisters,” he commented, adding that he found shoes as well as socks that supported him well on the full trek.

Beginning the full Camino in September 2019, Scott discovered he was in much better shape than he thought, having trained for about 4-5 months prior to the trip. He said, “If I wasn’t walking outdoors somewhere, then I was at Powell Wellness Center.”

After Bobby Zajkowski completed Scott’s assessment, personal trainer Katie Hutchins introduced him to the fitness machines. Scott said, “I had used the treadmill often, but hadn’t used much else at the club. I also have a bad back, so I was nervous about using the machines and about doing core body work. Katie made sure I knew which machines to use and which ones to avoid. She set me up with a core training program and helped with some stretching exercises. With her help, I was able to work circuit training and core work into my routine.”

“Since I planned to use hiking poles on the trip, upper body work was important. The core work helped me manage the back problems on the trip. Katie not only trained me in the proper form at the start, but also watched me when I was working out to make sure I continued to use the machines and core exercises appropriately.” Scott also elected to purchase a personal training “Go Package,” and was able to get some personalized training from Larry Horner in the month before taking off for Spain.

Scott adds, “The most important gift I got from Powell’s staff, though, was encouragement. They were genuinely interested in my success. As a 66-year-old man, I was very nervous about whether I was up for the challenge. The folks I worked with at Powell were always so positive and reassuring. Their encouragement gave me confidence that I could walk the 500-mile trek and their positive outlook proved true—I was able to successfully complete the pilgrimage and to avoid any serious injury while doing so.”

Although Scott began the Camino with a spiritual goal, he found his experience to be more about the walk itself and the people he met. He commented, “I met people from all over the world. You develop camaraderie as part of sharing the experience and have some intense conversations because people open up more than they would in daily life. I continue to hear from people I met, which is fabulous confirmation of the brief but intense friendships I developed and enjoyed during the trek.”

Photo below – Scott enjoying a meal off the trail in Galicia, a region of Spain that the trail passes through. While the route is mostly in the countryside, nearby towns offer opportunities for rest and relaxation. 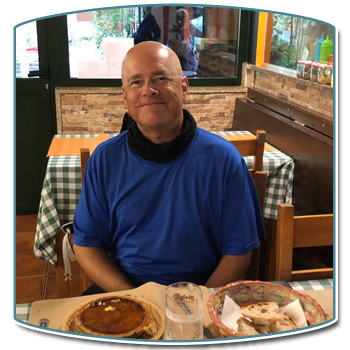 Our thanks to Scott for sharing his adventure. You can read more about his trek in a series of articles he contributed from the trail to the Culpeper Times in September and October 2019; these are posted online at insidenova.com.