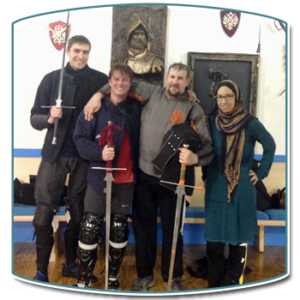 Imagine wielding a 3-pound sword while wearing a heavy helmet, thick padded clothing, and protective coverings for your arms and legs — moving about in this gear presents challenge enough. Add the intense physical demands of swordplay with an opponent ― endurance, strength, agility and flexibility are needed for success in a match. There’s no doubt about it, PWC member Paul’s recreational passion, historic European martial arts (HEMA), requires a high level of fitness.

With an interest in swordplay, Paul spent about two years looking into recreation opportunities before  HEMA came to his attention. Paul liked HEMA’s emphasis on historical accuracy; to develop and fine tune their skills, many instructors and participants work with copies of ancient manuscripts that were created as instructional manuals by masters of the art of sword play from the 14th through the 16th century.

Paul’s particular interest in the world of historic European martial arts is the German longsword. This sword is wielded two-handed; Paul pointed to the movie Braveheart as an example of this type of swordsmanship. (Other historic martial arts involve the Italian rapier – remember the movie The Princess Bride? – and the Scottish broadsword – think Pirates of the Caribbean.)

When Paul sought out a trainer to work with at Powell Wellness Center, his goal was to achieve a level of fitness that would support him and help him excel at his chosen recreational activity.  Over the course of a year, he worked with his trainer on body mechanics and correct form with weight lifting for strength development, as well as endurance through high intensity training. Sessions on the rowing machine for a cool-down period completed his training regimen. “My routine was not about powering through. It was about doing it correctly and developing strength with good form. I built a bigger gas tank for swordfighting, and I have never had such great confidence in myself until I worked with a trainer,” notes Paul.

He drives weekly to northern Virginia for his classes at the Virginia Academy of Fencing (VAF), which offers Olympic sport fencing in addition to historical swordsmanship. After his session, Paul partners with his “battle buddy” Josh Yeager, a seasoned swordsman, for one-on-one training. Paul feels he needs two years under his belt before entering competition, although he has participated in mock tournaments that teach participants what to expect during a formal tournament.

Asked what he would say to anyone interested in HEMA, Paul advises, “When you begin, don’t be scared. There is a level for everyone. Maybe you’re into Star Wars and want to look good with your light saber. At the Virginia Academy of Fencing they will match the level and intensity that you want to bring.” He described how the VAF supports many different ages and abilities, highlighting as an example a mother and son duo who regularly visit the academy for instruction.

Paul added, “The people I have met through this sport are incredibly kind and nice. There is respect and honor toward fellow participants and a lot of supporting one another through sharing tips. I’ve developed confidence through the swordplay and medieval wrestling. The physical gains I’ve made are going to help me when I enter competition.”

Recently Paul has taken Powell classes like BodyPump™ and TRX™ with his fiancée. He’s hoping to also do a yoga class. Sounds like he’s building on the gains he’s experienced from personal training with some serious cross training.

If you are interested in HEMA, take a look at the Historic European Martial Arts Alliance (hemaalliance.com). HEMA’s online presence includes videos on YouTube that show competitions.