Are you familiar with the Senior Games? Every state offers this opportunity for individuals 50 and older to compete in a variety of sports that can range from archery to track and field. At their state’s games, athletes may qualify for national competition. State competitions alternate on a yearly rotation with the National Senior Games competition. Virginia has a long history of participation: 2018 marks the 40th anniversary of the Virginia Senior Games. 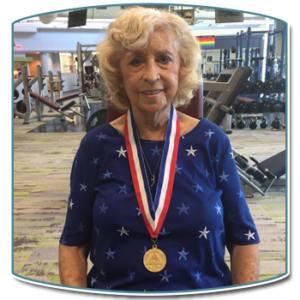 Powell Wellness Center member Maxine is a former Senior Games athlete, as is her husband Bernard. In fact, over the course of their 10 years of participation in the state games in Virginia and West Virginia, Maxine and Bernard between them won 75 medals in gold, silver and bronze!

Maxine says she has always been very active, and the Senior Games seemed like a fun thing to do. She played basketball in high school, so that sport was a natural choice for her when she became involved in the Games. She won the gold medal for basketball free throws when she was 66 years old. That achievement occurred one year after she had completed five years of treatment for breast cancer. She also participated in team basketball. At one point, Maxine’s team was all set to compete in the National Senior Games. Unfortunately, one of her teammates was diagnosed with an illness and they were unable to compete.

Senior Games-related travels took her to Utah, Louisiana, Pennsylvania, and also within Virginia when the Senior Games were hosted in Newport News.

Although she no longer competes in the games, Maxine remains active. At PWC, she typically walks 3-4 miles on the track three times a week. If for some reason she can’t finish her mileage at PWC, she walks on her driveway. She also works out with the strength building machines at PWC.

Maxine recalls that she was interviewed by her great nephew as part of a project he was working on for Breast Cancer Awareness Month. Her message to other women was upbeat: “Do not get discouraged, you can overcome the challenge.”

Her recollections of Senior Games activities are similarly upbeat: she is proud of her effort and grateful that she had the good health and strength to participate. And the 75 medals earned by her and her husband? Many were used as prizes at fun events that they have hosted over the years! We’re glad she was able to display one of her medals for the Member Spotlight photo!